This month a productive meeting was held with Foriegn & Commonwealth (FCO) Minister the Right Honourable Mark Field  to present a copy of the West Papuan People’s petition.  During the meeting Chairman of the United Liberation Movement for West Papaua, Benny Wenda also requested an official governmental position on West Papua. The discussion included an overview of the Act of Free Choice, progress on international support for West Papuan self-determination, and a vision for the future of relations between West Papua and the United Kingdom.

An All Party Parliamentarian Group (APPG) meeting was also held. Members addressed plans to prepare an on-going strategy to lobby the UK government on behalf of the Papuan people, as well as present written questions and answers. Forming an official Labour Friendship Group for West Papua was also discussed and due to be launched in 2019. 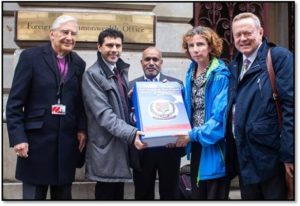