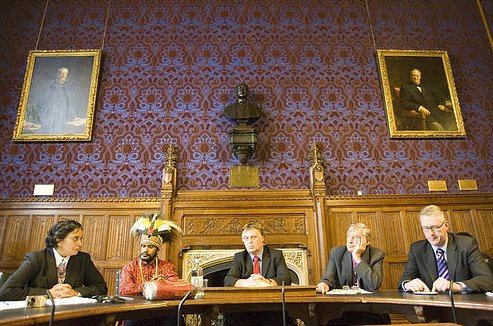 The International Parliamentarians for West Papua (IPWP) is a cross-party group of politicians from around the world, supporting self-determination for the people of West Papua.

Since 2008, there have been further launches of IPWP held in Port Moresby, Papua New Guinea hosted by Powes Parkop in September 2009, and in the European Parliament in Brussels hosted by Caroline Lucas MEP in January 2010.

IPWP was set up by exiled West Papuan independence leader Benny Wenda, and is co-chaired by the British politicans Andrew Smith and Lord Harries. Andrew Smith is also the Chairman of the British All Party Parliamentary Group for West Papua. The  goal of IPWP is to develop international parliamentary support and awareness for the West Papuan civil resistance movement, the illegality of the 1969 Act of Free Choice, and to highlight the inalienable right of the people of West Papua to determine their own future through a free and fair referendum. The IPWP takes as its model a similar group that helped lead the independence movement of East Timor.

West Papuans have suffered 50 years of human rights violations, discrimination and abuse at the hands of Indonesia after it fraudulently took control of West Papua in a staged ‘referendum’ organised by the UN. I hope to continue working closely with IPWP to ensure the EU applies and keeps up the pressure on Indonesia and the UN to grant the peoples of West Papua a properly conducted referendum on independence
Caroline Lucas, MP