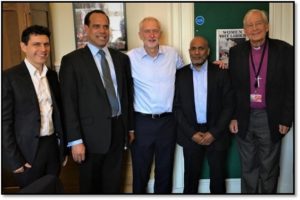 Leader of the opposition, Rt Honorable Jeremy Corbyn MP, welcomed Foreign Minister Ralph Regenvanu of the Republic of Vanuatu, Chairman of the United Liberation Movement for West Papua Benny Wenda, Chairman of the All Party Parliamentarians group for West Papua (APPG) Lord Harries of Pentregarth. and MP and co-chair of APPG Alex Sobel.

The meeting was held to welcome the Honorable Minster Regenvanu to the UK and to discuss updates on West Papua. The meeting’s agenda included discussions on progress during the United Nations General Assembly (UNGA) in New York and the devastating consequences of resource extraction on the West Papuan environment caused by the majority Indonesian owned Grasberg mine at Freeport, Corbyn stated “ I do not forget about the people of West Papua.”