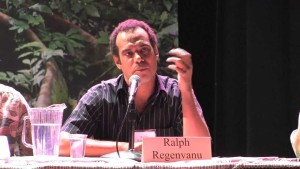 Vanuatu chiefs and church groups have led a march through the Vanuatu capital Port Vila to mark West Papua Day.
They are among supporters of West Papuan self-determination who have been holding ceremonies today (Tuesday) within and outside Indonesia’s Papua region.
The former MP for Port Vila Ralph Regenvanu says chiefs and churches are keeping up the pressure for Vanuatu to stand up for West Papua.
“Despite all the instability in government, the fact that governments get deposed and new ones come in, the important thing in Vanuatu is that the chiefs and the churches continue to be active in advocating to the leaders of the country and civil society in general to continue to put pressure on the government to continue to maintain our stand with regard to total support for the independence of West Papua.”
http://www.radionz.co.nz/…/291…/vanuatu-marks-west-papua-day