“Christian churches are the conscience of the nation, and therefore have the duty to be the voice of the voiceless and must continue to stand in solidarity with our Melanesian brothers and sisters in West Papua who are still under oppression, and are still living in the current environment which can only be described as one of institutionalized enslavement and suppression of human rights”. 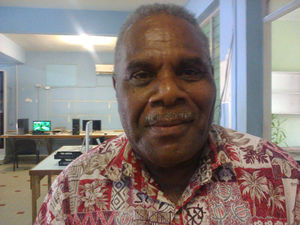 He was responding to an article in the Daily Post on December 24, 2015 which the Indonesian Defense Minister Ryamizard Ryacudu targeted Vanuatu at a press conference in relation to the West Papua issue.

The 64-year-old retired army general, Ryacudu, reminded “other countries” to refrain from encouraging separatist movements in resource-rich Papua, hinting that serious consequences would entail if Indonesia’s position were ignored.

“For us, Papua is still part of the Unitary State of the Indonesian Republic. That’s non-negotiable. [The area] from Aceh to Papua is the jurisdiction of Indonesia. There’s no two ways about it. I hope that’s understood,” the Defense Minister said at a press briefing.

The Jakarta Post reported that during his stint as Army chief Ryacudu became notorious for cracking down on separatist movements in Aceh and Papua.

Ryacudu later said his remarks were directed at Vanuatu.

Meanwhile Nafuki stated: “The Office of the Vanuatu Free West Papua wishes to make these comments as a form of response on behalf of the Christian churches, the chiefs, women, youth, civil societies and the people of Vanuatu.

“Vanuatu foreign policy on self-determination for countries which are still colonized remained the same.

“In many ways our foreign policy continues to promote United Nation General Assembly Resolution as stipulated in Article 2 of 1514 Decolonization Resolution (XV) of 14th December 1960, which states clearly that: ‘Every nation has the right to determine their own fate, and based on this right they are free to choose their political status and also free to continue their development in the fields of economic, social and culture’.

“Therefore all the countries that are the members of the United Nations including the United Nations, especially the Decolonization Committee, are under the obligation to observe and strictly implement this resolution.

“For this reason the continued existence of any form of colonialism certainly impedes the social, cultural and economic development of dependent peoples, such as the West Papua and certainly militates against the United Nations’ ideal of universal peace.

“The Christian churches as the conscience of the nations, and therefore have the duty to be the voice of the voiceless, must continue to stand in solidarity with our Melanesian brothers and sisters in West Papua.