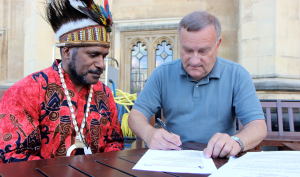 As the summer recess for the British Parliament reaches its close, Benny Wenda has been holding a series of meetings with British politicians at Westminster. Former Labour government chief whip Nick Brown MP (Labour) has signed up to join the International Parliamentarians for West Papua (IPWP). Mr Brown joins the growing number of politicians from around the world who are uniting to support the West Papuan people in their call for legitimate self-determination.

Speaking after Mr Brown had signed the West Papua Declaration, Benny Wenda stated “we are delighted that Mr Brown has supported the West Papuan people. We know our position and are convinced that when people study the history and find out about what has happened in West Papua then they will see that the West Papuan people have been denied their right to legitimate self determination. Political support is growing” He added “The opening of our new offices in Oxford and in The Hague, in the Netherlands, has made it easier to coordinate our efforts and work with politicians and all supporters”.

Andrew Smith MP, who is a founding member of IPWP said at the opening of the Free West Papua campaign office in Oxford in May this year that, “The reason that IPWP is gathering momentum is that it’s principle is true and just. The Act of Free Choice (in 1969) was one of the most shameful episodes in the whole history of the United Nations. The UN will not be true to it’s charter and it’s principles until the people of West Papua are given a full and fair opportunity to exercise their right to self-determination.”

In a recent debate in the British House of Lords, Lord Kilcloony said, “This (West Papua) is not only a tragedy but, in the context of many tragedies around this world, one of the worst that I have come across” He added, “The silence of the world on the tragedy of West Papua is amazing. The international bodies and the United Nations itself, with their disregard of what is going on in West Papua, have been shameful in their attitude.”